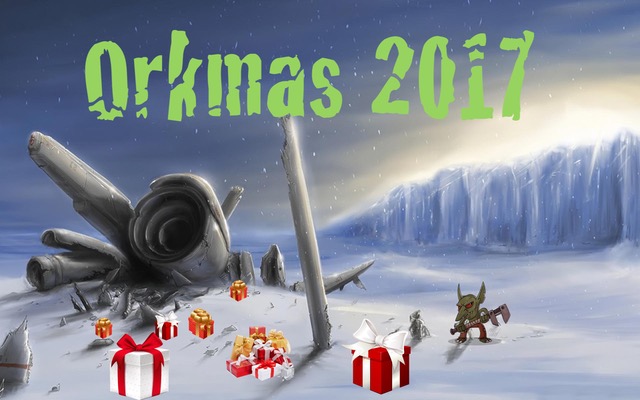 When the SS Rudolph was hit by an unexpected meteor shower while delivering a consignment of toys to Imperial boys and girls on the outer worlds, Santa and his indentured Eldar workers barely managed to get to the escape pods before the ship crashed into the snowy wastes of a nearby planet.

Fortunately, the Rudolph had an automated distress beacon.

Unfortunately, the signal was received by two notorious Ork warbosses: Warboss Grinch and his mechanized mayhem, and Warboss Kringle and his green tide of foot sloggas and beasts. The rivals each set off with a mob of boyz to loot the ship of all its gubbinz. The crash also attracted the attention of a band of rebel grots, led by Big Mek Trotsky. Who could collect the most loot before an Imperial rescue force could arrive?

Gubbinz may be looted by a unit in contact at the start of their turn.

The Proletarian Masses of the Great Grot Revolution

Each mob had a power level of 101. The ever-speedy Warboss Grinch moved first, followed by Warboss Kringle, followed by the Grots (who, after all, only have short little legs). 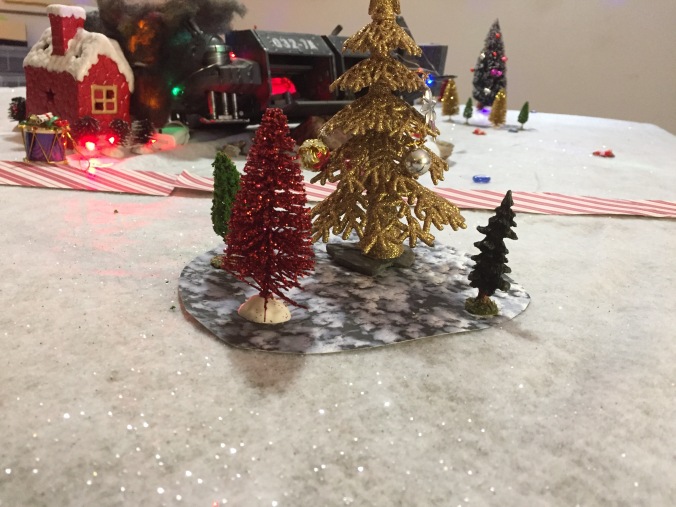 The burning wreckage of the SS Rudolph. 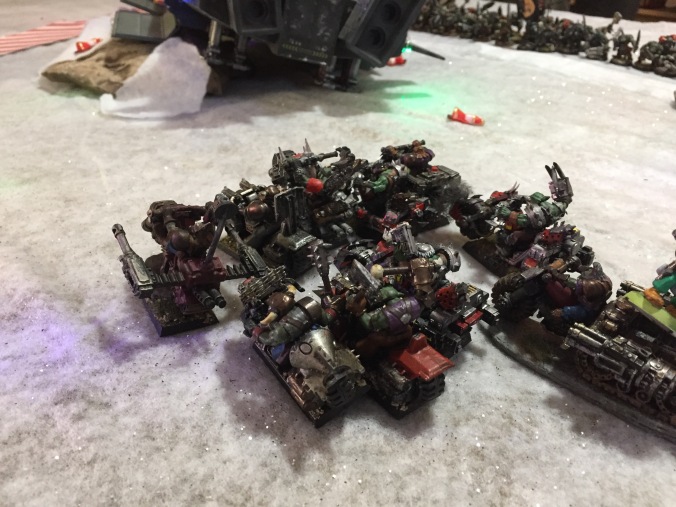 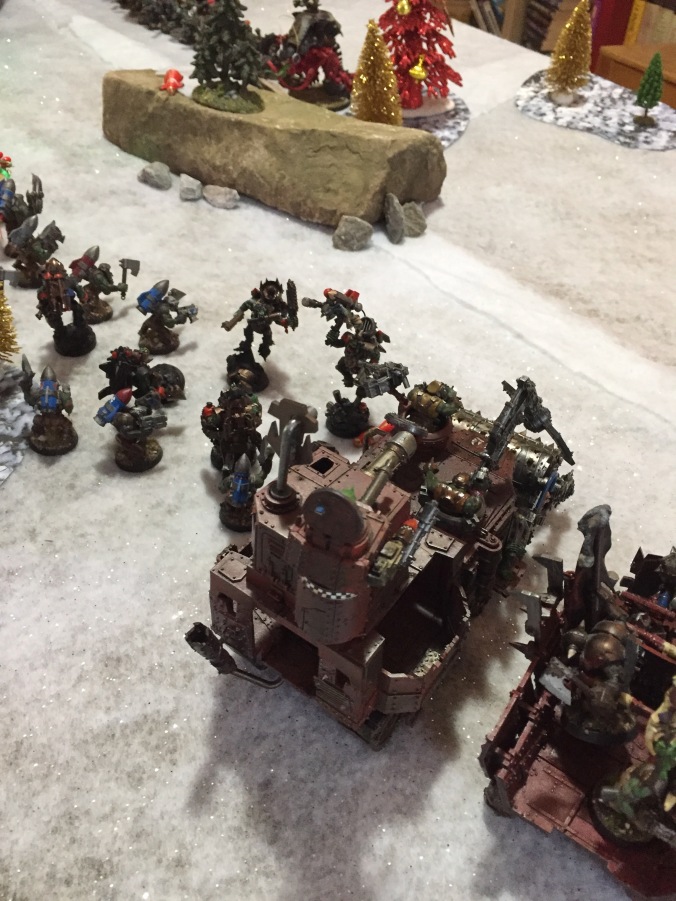 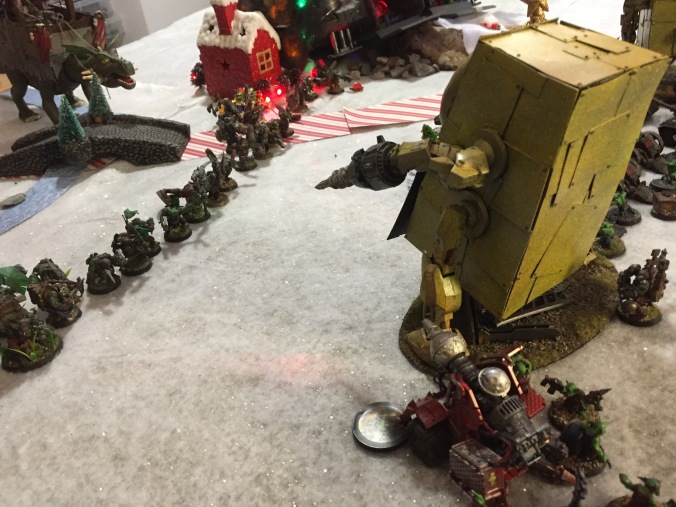 Snikrot and a sneaky force of Kommandos rises from the snow in front of the Gorkanaut. Both they and the huge mob of Boyz who jumped into position would fail their charges, saving the Grots from early annihilation. They would then be pounded into green goo by accurate Grot shooting. 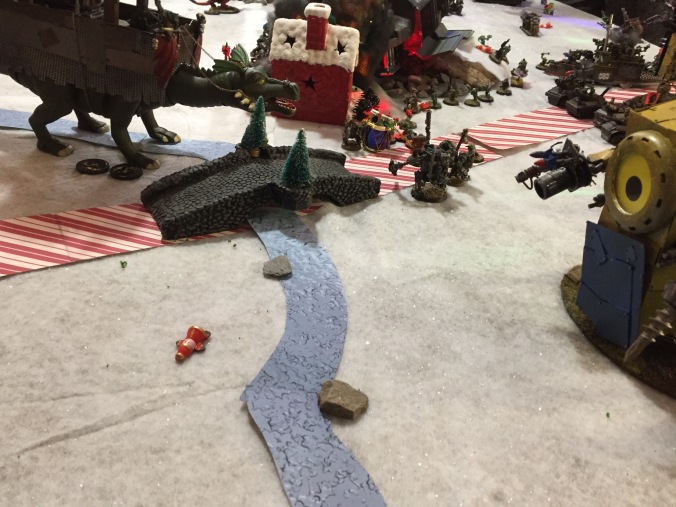 As Ork Boyz and Grots squabble over presents, the Squiggoth and Gorkanaut eye each other warily. The former would charge the latter soon after, crushing it to pieces. 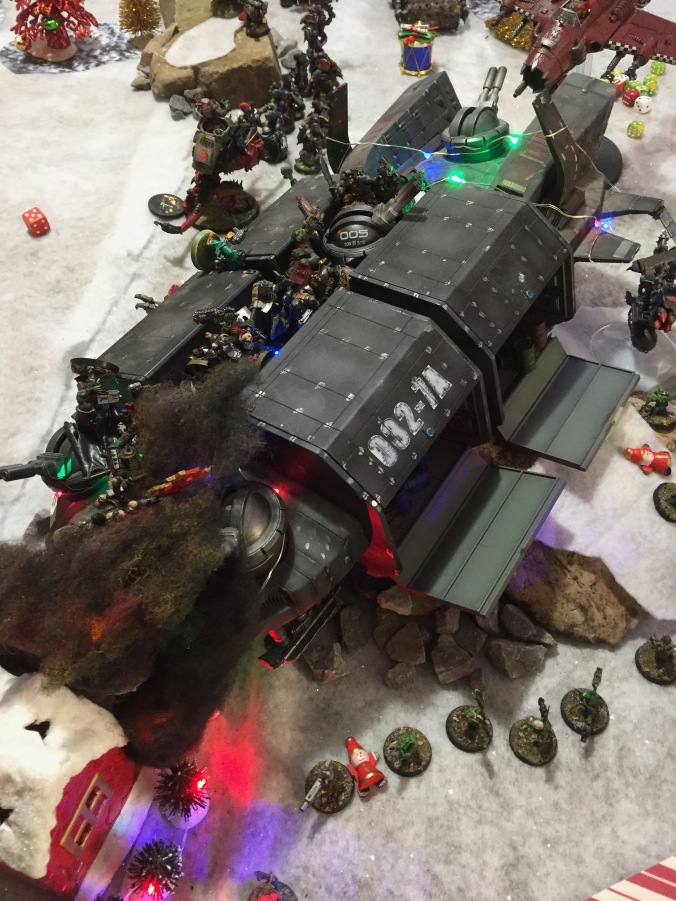 Kringle’s Boyz clamber all over the SS Rudolph like ants of a carcass, tearing away all the gubbinz they can find. As they do so, the Dakkajet starts a strafing run. 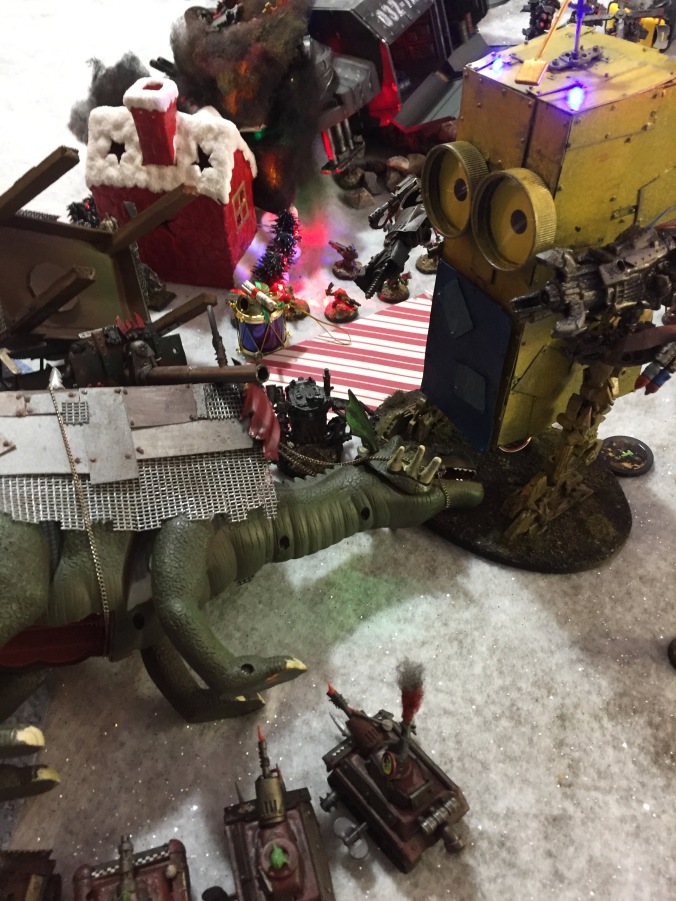 The Morkanaut avenges its twin, and tears apart the Squiggoth with its klaws as Grot tanks look on. 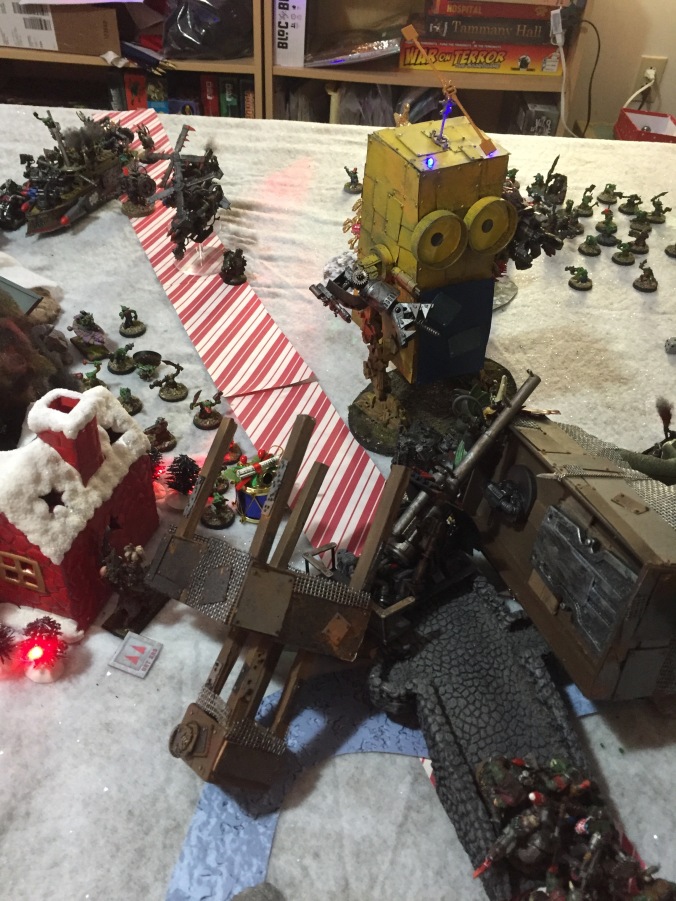 To the rear of the Grot force, Grinch’s bikers and deffkoptas are taking on more Grot tanks and the mega-tank. 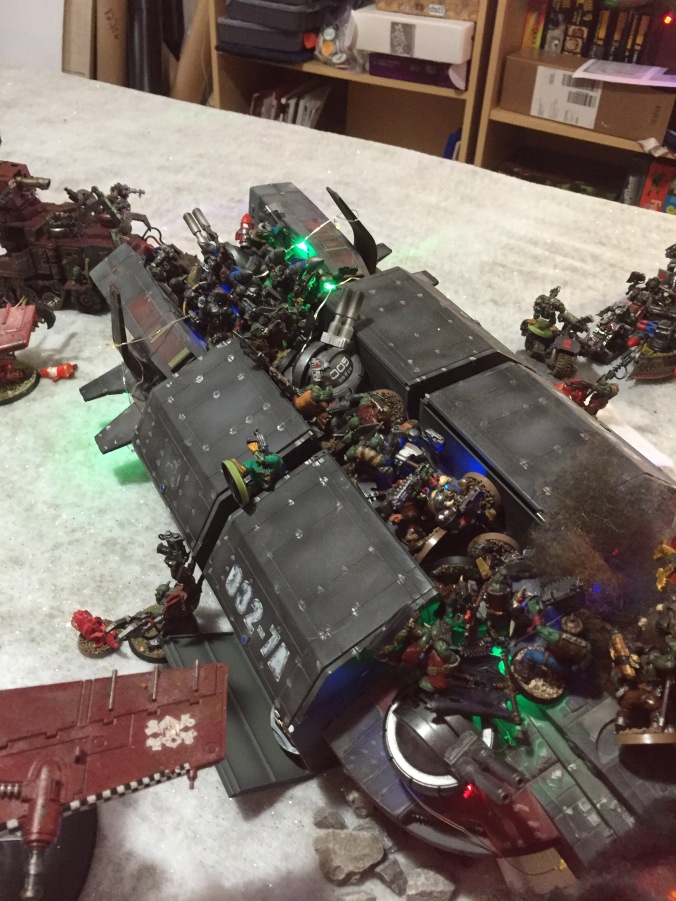 Kringgle’s boyz continue to pull bits of the spaceship. Some of Grinch’s stormboyz arrive to try to stop them, but they’re outnumbered. 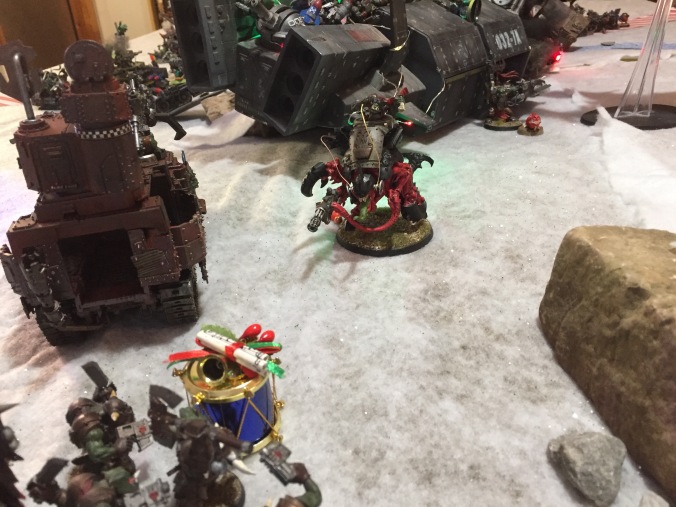 Kringle’s tame carnifex (Deff Dread) tries to stop some of Grinch’s boyz from claiming one of the larger presents. 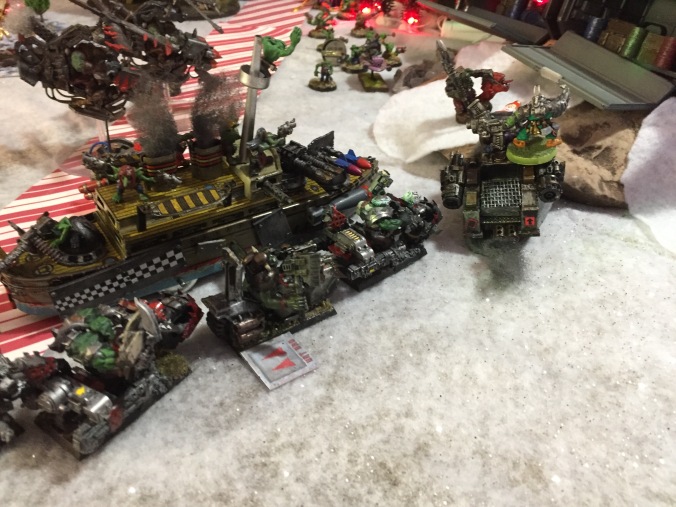 The Grot mega-tank proves to be a surprisingly tough foe as the number of Nob bikers begins to dwindle.

In the closing moments of battle, one of Warboss Kringle’s weirdboyz jumped the tankbustas behind Grinch’s lines in the hopes of destroying the battlewagon, but it was too little, too late. Although the fight was still close, the arrival of the Imperial rescue force meant that the greenskins had to retire—and Warboss Grinch was declared the winner.